Look what critics and viewers are saying… 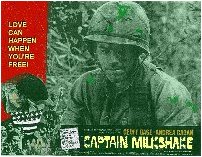 A Copy the Article on Captain
in Ugly Things #21

Hans Hurch, the Director of Viennale, and Katja Wiederspahn, Programming Director, were kind enough to let me interview them at the closing party… They both said wonderful things about Captain…

Katja said “…You really get the feeling of freedom. It is eye-opening, joyful, delightful, liberating, amazing, surprising… so full of images you wouldn’t expect…”

Hans said… “…absolutely stunning and something very special. What was important for me was that it is really an original work… it is very moving, very political, very cinema graphic film and the interesting thing about the film is… when you see it now- it is absolutely fresh- it’s as if no time (has gone by) it is a real document of a certain time, of a certain state of mind, even of a certain way of cinema… It is a film when you see it today- so much time later, it is a film that is much more real, much more present, much more alive then many films that I saw that were just made a half a year ago- this is a very special quality…”

I enjoyed the film Captain Milkshake. I couldn’t believe how well it was done with the budget the director had to work with. The change from black white to color made such a point from reality to thoughts. The topic of the film stays a part of the conversation with my friends whether for or against the involvement of the U.S. I thought the stories from the director after the film were great.
Jeanette

Captain Milkshake is a time capsule. Like the times it represents the film is flawed and self-righteous as well as energetic and vital. But, the best performances were by some of the “character actors” — Uncle “Jimson” and the “anti-war gold star mother” come to mind. And, the family interiors anticipate David Lynch in a weirdly delightful way.
Viewers interested in another view of the times, also claiming to be authentic, should check out David Holzman’s Diary (Jim McBride 1967).
Mark

It was our first time and we had a great time. After all of these years, the story is kinda old, but the production was excellent. We certainly will come in the future. (We are from Escondido!)
Robert

Captain Milkshake was perhaps the most memorable film that we have seen to date! It was an excellent representation of the various points of view of the Vietnam era. The director was so far ahead of his time! The visual effects are so interesting and extremely creative. Great film.
It was fun to see the San Diego thirty years ago. Richard, the director, is an exceptional person. I loved hearing his comments about the making of the movie. He gives “great story.”
Kaaren

I enjoyed the movie. I kept remembering that it was filmed 31 years ago because the sound was difficult. Also, I thought the cinematography was way ahead of its’ time, before Oliver Stone. Clearly they were very talented for those years.
Susan

I grew up in San Diego and Encinitas. I watched the film with the hope of seeing some of the San Diego I loved 31 years ago, but with few exceptions, the scenery was pretty generic. I also grew up in a conservative family and always felt ambivalent about the war, then and now.
I was surprised that my overwhelming feeling when I attended the film was embarrassment! I was embarrassed that while the soldiers and Vietnamese were facing death the most dangerous thing we faced at home was some overzealous policemen and National Guard soldiers. I know that the parents of the students at Kent State believe that was something to be feared, but overall, we were safe, well-fed and spoiled. Most of the people I know used the anti-war movement as an excuse to party. I was embarrassed knowing that a woman who faced the real dangers of the war saw the truth about the anti-war movement: sex, drugs and rock-n-roll were really more important, not saving people from the horrors of war.
The unintentional theme of the movie was how self-indulgent and shallow they were. Prior to the screening of the movie a telling moment occurred when the producer was talking. He got the most response from the audience when he mentioned marijuana and LSD. When he mentioned the anti-war movement there was silence. I guess not much has changed!
Jenny

Well, that was a powerful film experience that took me by surprise. I was expecting nostalgia, but I got much more. The roughness & camera angles, the color to black and white, the psychedelic swirlies, all of it transported me in the way-back machine to my ggg-generation. To think of the kind of movies we were used to seeing then (it was either Fellini or Warner Bros) Capt. Milkshake was revolutionary.
It made me remember how important ideals were and how disappointing it was to discover that they couldn’t be realized in anything other than my own head. Made me long for a time when the world wasn’t so jaded. And, I realize we still can’t communicate!
But, back to the movie. The characters and story line were very realistic, warts and all. The choice of music was excellent. Great movie. Richard is an engaging storyteller. I’m so glad he broke through his “writer’s block” with this film. I’m glad he didn’t change a thing.
IFS gets quality films. Everybody should join!
Peace,
Elizabeth

Captain Milkshake carried me back to a time I had locked away in the dusty file cabinet stored in the recesses of my consciousness. I enjoyed remembering the innocence of youth, where anything that was natural and felt good couldn’t be wrong. I was not involved in the Peace Movement, but I knew the men who were. Angry rebellion juxtaposed with free love created such a curious time.
I talked with some of the older movie goers who attended the screening and had walked out before the finish. For some, the content was too painful as they had watched their own children drown in activities and pleasures of the period. Some just could not relate. I, for one, found the film to be a wonderful historical snapshot.
Dody

Everyone should see the film Captain Milkshake! Not only does it capture an important moment in the past, but is very relevant to today. Beautifully filmed, excellent story, GREAT actors…
Melanie